WATCH: The REAL Reason NFL Players are Taking a Knee 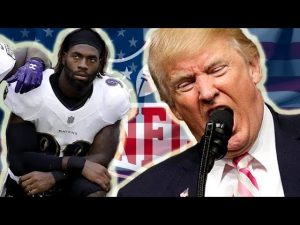 I like Paul Joseph Watson. Mostly because he makes me laugh but specifically because he tends to be so ridiculously accurate in calling out the leftist narrative and its hypocrisy. He’s right on target with his analysis of what is happening today with the overpaid, spoiled rotten athletes in the NFL who are “taking a knee” during our national anthem as a way to protest the “injustices” against blacks by cops.

100percentfedup.com tells us that

Watson points out that while they’re protesting the deaths of blacks at the hands of cops in their communities, they completely ignore the rampant black on black crime and the actual high crime rates by blacks in the cities where the alleged “injustices” are taking place. Watson also claims the NFL players are ignoring the fact “that white people are more likely to be shot dead by cops” than blacks.

This week, NFL players and even some coaches, turned their ire against President Donald Trump for daring to suggest that NFL owners should be taking disciplinary action against players who disrespect our flag that represents the lives sacrificed by so many brave men and women who died giving them the right to protest.

Paul Joseph Watson reminds Americans how prevalent violence is with many of the “thugs” who play in the NFL. Watson even suggests, “Maybe they all hate the police so much because the cops are the only ones stopping them from beating up their own wives and girlfriends.”

This is pretty insightful and funny stuff. WATCH (Language Warning):