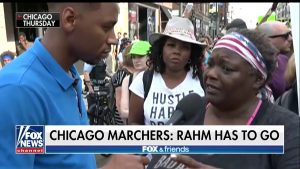 The city of Chicago is constantly invoked as a reference as to just how badly Democratic politics, particularly when it comes to law, order, and justice, completely fail the people they claim they’ll help.

Crime and gun violence are skyrocketing in a city notorious for “justice reform” and “common sense gun control”.

Because, stay with me now, when you shorten criminal sentences and strip the law-abiding citizens of their Second Amendment rights, more people commit crimes and only criminals have guns.

Who woulda thunk it?

And while Chicagoans struggle with dangerous neighborhoods and failing schools, Rahm Emmanuel, according to the Holy Bible of Progressive Politics, worries more about protecting criminal illegal aliens from deportation than he does about protecting the lives of the American citizens living in his city.

At least, this was the sentiment on the streets this week as protesters, notably a pretty healthy mix of black and white Chicagoans, gathered to tell Emmanuel how they felt about him, and why they’re turning instead to Trump’s promise to clean up American cities.

“Honestly, the residents of Chicago are fed up with Rahm Emanuel’s inaction,” said Gianno Caldwell who spoke to the crowd. “In addition they are fed up with the violence. They don’t see any change.”’

“I found it to be particularly interesting that there are leaders within the Democratic Party in Illinois who are seeking the help of outside resources such as President Trump,” he concluded.

I think something very interesting we see emerging out of the explosive Trump era is that he’s forcing more people to take a cold, hard, look at Democratic failures and what their true success rate is with helping the communities they so frequently claim to champion.

Trump is politically incorrect, buffoonish, and does little more than mock the values of intersectional politics. But his policies speak for themselves. A stronger economy, safer streets, and empowered law-abiding citizens are beneficial to all Americans, no matter what their position on the intersectional hierarchy is.

It doesn’t matter how much you push political correctness, wax compassionate about the plight of the inner city black child, lament the struggles of surviving on minimum wage, or grieve for the victims of gun violence, if you fail to actually do anything about these things, you’re not only a failure as a politician…you’re a fraud.

And that, to me, sounds exactly like Rahm Emmanuel and the establishment Democrats.