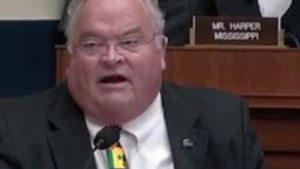 Conservatives across the country who have had their voices stamped out through selective social media censorship that the Big Tech CEO’s swear isn’t happening have been waiting for this moment.

Jack Dorsey, the CEO of Twitter, testified before Congress Wednesday on censorship of conservatives on his platform, and so understandably, the tension was high.

Laura Loomer, a right-wing journalist and activist who was understandably determined to make sure conservative voices were heard during the hearing, apparently decided to take a page out of Code Pink’s playbook over at the Kavanaugh hearings and tried to disrupt the proceedings.

That was when Rep. Billy Long, a former auctioneer stepped in.

Long, a Republican from Missouri, is well-known for his long career as an auctioneer, and something about Loomer shouting about shadowbanning must have triggered his auctioneer instincts.

I have no idea why, exactly, but it was nonetheless hilarious.

As Loomer was escorted from the room, continuing to shout her plea to the President to do something about Big Tech’s ability to influence the upcoming election with their censorship practices (we hear ya, Laura!), he just began…taking bids.

While we share Loomer’s sentiment, we certainly have to appreciate Long’s creative, and hilarious, way of restoring order to the room.