WATCH: Popeyes Is Officially the Thunderdome of Fast Food After Employee Body Slams A Customer 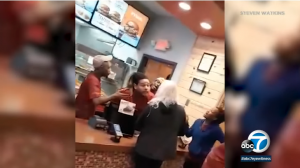 I hope none of y’all risked a visit to Popeyes over the weekend, as it has apparently become an unjustifiable health hazard to do so.

Last week, the fast-food chicken joint became a harbinger of the apocalypse when a Maryland man was stabbed to death for cutting in line to get one of the restaurant’s long-awaited sandwiches. Over in Los Angeles, a woman ripped the everloving hell out of her Mercedes in a failed attempt to cut into the drive-thru line—only to be refused service for sheer stupidity.

When the first iteration of the Great Chicken Sandwich War of 2019 occurred over the summer, I warned y’all about the grueling pressure Popeyes workers were under to meet the insane demand for the elusive sandwiches, with some locations forcing employees to work up to 65-hour, six-day weeks to feed the mob.

All of these factors have worked together to transform the restaurant into the Thunderdome of fast food.

In an incident in Columbia, Tennessee, a customer was very literally bodyslammed by a Popeyes employee after a fight over a disputed charge on her receipt. Breitbart reports:

Viral video footage of the incident taken by a customer shows Debra Staggs standing at the restaurant’s counter as she reportedly disputes a charge on her bill.

As the situation escalates, an employee tells Staggs she will call the police and have them forcibly remove her from the building. The workers claimed she then used a racial slur.

“Hey, hey. You in the wrong place saying the n-word,” a voice says from behind the camera. Moments later, the video shows an employee with his arms around the victim’s waist as he carries her into the parking lot and slams her on the ground.

Deriance Hughes, the 29-year-old employee who missed his calling as a pro wrestler, was arrested on Friday and now faces charges of aggravated assault. Needless to say, he got fired, although the video reveals at least two other employees who either hit Staggs or celebrated like a moron when she was slammed onto the pavement who are not mentioned in any reports.

“If she said something she should not have said in retaliation and the heat of the moment we do not condone that and she regrets that, but it does not give someone the right to break somebody’s body almost in half,” said Staggs’ attorney, Rocky McElhaney, who says Staggs suffered nine fractures, six broken ribs, and a broken knee. She has since had two surgeries that will require months of rehabilitation.

Staggs said she ate at the restaurant Sunday, which was her first mistake, and called the restaurant manager after apparently seeing a duplicate charge on her receipt. “When she got there she was treated with hostility and anger from the manager. There were words back and forth,” her attorney said.

McElhaney also claimed his client was called “an ugly broke-down cracker” and stated that “She’s a mixture of sad and angry right now. Nobody deserves to be treated like that.”

A Popeyes spokesperson (who is probably pretty busy these days) issued a statement about this particular bit of mayhem at their restaurant:

We were shocked to learn about what happened in Tennessee. These actions run completely contrary to our standards and the integrity of our brand. Following an investigation, the franchisee took immediate action and we were informed that the employee has since been terminated. The entire circumstance is highly unfortunate for all involved and we hope to never see this type of behavior again.

Moral of the story? Cheeseburgers are safer than chicken sandwiches.