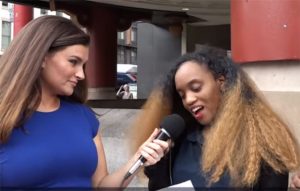 There’s nothing like having “Literally Hitler” for your president for a few years to shorten your memory.

Thanks to Trump Derangement Syndrome, we now have a society of leftist goldfish who seem to have forgotten that the “change” their favorite past president offered us included a whole lotta deportation, family separation, and strict-ish immigration policies. Well, a heck of a lot stricter than the open borders these folks want today.

So, when the Daily Caller News Foundation sent Katrina Hayden out to do a handful of “man on the street” interviews, I’m sorry to say more than a few people’s mental safe spaces were invaded.

I’m here to tell you, y’all, I had quite a bit of fun watching folks squirm after Hayden splashed cold water on their fond memories of President Obama’s immigration policies.

Here are a handful of examples of quotes shared with the folks on the street:

“If you’re going to have a coherent, cohesive society, then everybody has to have some agreed-upon rules. It’s not racist to say if you’re going to be here then you should learn the language of the country you just arrived at.”

If you’re having a hard time figuring out what could possibly be controversial or racist about the idea that folks coexisting in the big ol’ Melting Pot should at least be able to understand and communicate with one another, I’ll make room for you in my boat. Folks on the street, however, not so much.

“That’s most definitely a racist idea,” said one woman in the video. “I don’t know what he doing. He can just stop what he doing for real.”

“It’s extremely racist for him to believe that English is the only language we should know,” said another, echoed by another who said, “I don’t agree with that statement in order to learn English to come to this country.”

Yeah. Because the quote says all immigrants, regardless of their home country, must unlearn and nevermore speak the sweet words of their mother tongue in order to have a more harmonious society (not).

While this is something President Trump surely believes, President Obama really said it, and their reactions are priceless:

Of course, some folks at least had the dignity to be married to the (bad) idea of open borders and unrestricted immigration rather than to a single, fallible man and copped out, saying that “no president has gotten it totally right”.

Hopefully, a few minds were changed by the video—one can only pray. At any rate, it’s fun to watch their gears get stuck for a minute!