WATCH: Pence Makes No Apologies for His Stance on Roe v. Wade 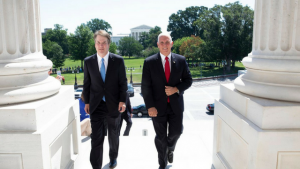 While Pence is rarely in the spotlight, as his public behavior is pretty much the polar opposite of that of the President, he gave a refreshingly honest answer when asked his thoughts on the possibility of Roe v. Wade being overturned.

Appearing on CNN with Dana Bash, he did not skip a beat answering “I do” when asked if he hoped Roe would be overturned.

Bash started the segment by asking about Judge Brett Kavanaugh, whom President Trump nominated for the Supreme Court on Monday. She queried, “Are you worried that he’s not going to follow what you want to do?”

Pence answered, “Well, Dana, as you know, I’m pro-life; I don’t apologize for it, and I’m proud to be part of a pro-life administration that’s advanced pro-life policies. But what I can assure you is that what the president was looking for here was a nominee who will respect the Constitution as written, who will faithfully uphold the Constitution in all of his interpretations of the law.”

Bash pressed, “Do you still want Roe vs. Wade to be overturned?”

Pence pointed out, “I do, but I haven’t been nominated to the Supreme Court.”

This is an important point for conservatives and one that was reflected both by Trump and Kavanuah’s comments on the nomination on Monday evening. Supreme Court justices are not appointed to carry out the President’s agenda, although that’s typically how we expect it will go.

Justices are appointed to interpret the Constitution, period. This is why it was not a betrayal of pro-life values for Trump to decline to ask his potential SCOTUS nominees on their views on abortion, a point that Pence reaffirmed when pushed by Bash:

“Well, as I’ve said, I stand for the sanctity of life. This administration, this president, are pro-life. But what the American people ought to know is that, as the president said today, this is not an issue he discussed with Judge Kavanaugh; I didn’t discuss it with him either,” he replied.

CNN's Dana Bash: "Do you still want Roe v. Wade to be overturned?"