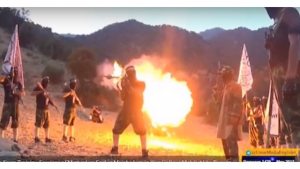 Look who’s trying to get with the times! Or…the times from 30 years ago?

I have no idea why this isn’t a bigger story because it is so weird and funny and confusing, you think more people would be discussing it.

The Taliban–remember them? The ISIS of the Aughts? Well, their Pakistani faction seems to be trying to bring them back to prominence in a very strange fashion.

The Telegraph has the story:

The video shows “martyrdom seeking mujahideen” training at a “war college”, according to screen shots published by Military Times.

Militants of the Tehrik-e Taliban Pakistan (TTP) have been blamed for dozens of suicide bombings and hundreds of deaths in a war with Pakistan’s government and military.

A series of successful military campaigns have put the militants on the back foot, but officials say they remain the biggest terrorist threat to the country.

I mean, check these guys out:

There’s so  much going on here–from the black t-shirts emblazoned with white lettering to the high-tops to the strangely close-cut camo shorts to the knee-high socks.

Is this punk? Or perhaps East LA circa 1996 meets Raqqa circa 2016? What exactly are they going for, and could they have anticipated mockery from the American media?

This is the demographic drawn to punk, to gangster rap, to the KKK, to MS-13, Antifa, East LA street gangs, and ISIS in Syria, and every other movement led by boisterous young men, and often, of course, women as well, who are angry about their circumstances in life and feel some sense of power and community. Violent young men who get to act on their urge for violence for the sake of some kind of revolutionary cause.

What better place for these terrorists to start to attract young, impressionable fighters than a super cool uniform, right?