WATCH: Owen Benjamin and PragerU Take on The Death of Comedy 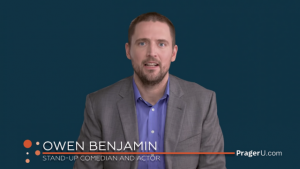 This is a video that needed to be made.

While the world is full of funny things these days, it seems we can no longer agree as a nation as to what is funny.

Why? Because not only has political correctness and intersectional politics killed our ability to collectively laugh at anything, but, as comedian Owen Benjamin points out in a new video for PragerU, comedy is based on common truths, and we can’t even agree on what’s true anymore.

“Comedy is important,” he begins. “Why? Because it’s a pressure valve that allows us to discuss uncomfortable truths in a friendly way.”

He goes on to explain that “comedy only works when we agree on certain realities.”

He tells of a joke he did on stage recently, where he said that lots of people compare Trump to Hitler, but Trump is never like Hitler, because Hitler would never have let CNN say those awful things about him.

“Anderson Cooper would never have survived the night of long knives!” the joke concludes.

This joke, unfortunately, would fall flat on many audiences, he explains.

He laments a nation that can no longer come together at the end of a long day to enjoy late night comedy. Late night comedy is, after all, no longer funny, with crying Jimmy Kimmel and characters like Steven Colbert, who Benjamin says is basically “Rachel Maddow with punch lines.”

These late-night “comedians” are only telling jokes for half the country, he says.

Things don’t have to be this way, Benjamin says:

“There’s no shortage of things to laugh about, we just need to find them…together. And if we don’t, we’ll explode!”