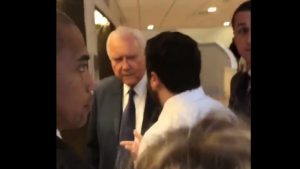 Because clamorous mobs are more meaningful to the left than the rule of law and constitutional justice, hoards of angry leftists have descended on Washington DC this week to protest the Senate’s failure to publically lynch Kavanaugh, impeach Trump, and enslave all white cisgender men…or something.

Republican Senators are, obviously, the target of their ire, who have had the audacity to decide to move forward with the SCOTUS confirmation process after the FBI investigation Democrats have been demanding for weeks found absolutely nothing to implicate Kavanaugh in the completely baseless claims made against him over the last few weeks.

Sen. Orrin Hatch, a member of the Senate Judiciary Committee, had a run-in with these armies of angry banshees recently, and, stunningly, even though they yelled at him with their pre-printed signs, he didn’t throw up his hands and demand Kavanaugh be sent to the gallows forthwith–can you believe that?!

Instead, he actually had the nerve to mockingly brush them off and walk away!

This, of course, triggered a chorus of hysterical screeching the likes of which hasn’t been heard since…well, every time people like this open their mouths, really.

Hatch waves off protesters screaming at him.

Protester "Don't you wave your hand at me. I wave my hand at you."

Protesters triggered, melt-down, scream at the 84 year-old Hatch, "Why don't you grow up!!!"

LMBO. I love that Hatch absolutely does not care.

Both moments like this and the way Senate GOP members are treating the Kavanaugh hearings restores my confidence after several long weeks that, at the end of the day, innocence until proven guilty will be preserved in our nation, and our constitutional procedures can win out.

At least…for now. Midterms are still right around the corner, folks!