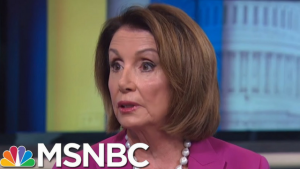 Can the Democrats not find fresh criticism of President Trump?

Look, the man has definitely been leading pretty conservatively, to everyone’s great surprise, but it’s not like there aren’t legitimate criticisms one couldn’t make of him.

Why do the Dems always resort to the same tired race card? The delusion of identity politics is a strong one, I guess.

Nancy Pelosi, who, in her defense, may simply have succumb to dementia and believes its still 2016 and calling Trump racist is still a new idea, recently took to MSNBC to jabber on about the President’s racist dog-whistles and white supremacy.

In an appearance on AM Joy, the host asked Pelosi to race bait, excuse me, reflect on the past year on the anniversary of Charlottesville.

It’s so terribly sad the year has gone by quickly but it has not diminished the sorrow this is for our country. We’ve gone backward, and the president with all of his statements is the master of the dog whistle. Everything he has done, whether it’s taking babies out of the arms of their moms, whether it’s issues that relate to health care in our country, access to services and the rest is — his whole thing is “Make America White Again.” That’s his thing.

This is pretty much all they have to go on–the child separation at the border, which a) had been happening long before Trump came along and b) ended weeks ago.

This isn’t going to stop Dems from milking it for weeks.

Nor will they stop milking the President’s comments that Rep. Maxine Waters, who generally says really dumb things, was “Low IQ Maxine.”

Democrats believe this to be racist as Waters is a woman of color, which in and of itself is pretty racist since no one else said that people of color had lower IQs. Is this the 1930s?

He’s afraid of Maxine; [BAHAHAHAHA] in fact he’s afraid of me; he’s afraid of the women who are going to be coming into Congress. He talks about “there’s no place for racism” and then he speaks that way. It’s really disgraceful. It’s disrespectful to Maxine, of course, to women, to minorities . … I’m always guided by our founders. “E pluribus unum,” from many, one.

Just keep telling yourselves that, ladies.