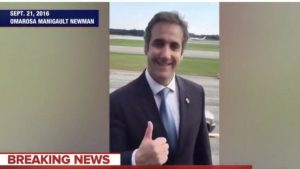 She’s still at it!

I would ask “why is the media still listening to this woman?” but I think we all know the answer.

Because they’re the mainstream media and they hate Trump and they are so desperately blinded by their hatred for Trump they would report on it if Satan himself made an appearance in their studios to bash the President.

That actually seems pretty news-worthy, now that I think about it…and it would be a refreshing change from fabricating dirt on Trump, I guess.

Anyway, the MSM is still back there at “fabricating”, and Omarosa is definitely their girl to do it.

Fresh on the heels of Cohen’s guilty plea to fraud that may very well implicate the President (which is, for once, actually kind of a big story), the former White House employee and reality start turned up on Chris Matthews to reveal what promised to be explosive, damning, earth-shattering footage of Cohen from the campaign.

No, seriously, it was a short clip Omarosa had taken of Cohen boarding Trump’s plane during the 2016 election….and literally nothing else.

Last week it was reported that @omarosa has an extensive stash of video, emails and other forms of documentation. Here's a video of Michael Cohen boarding Trump's plane during the 2016 campaign. pic.twitter.com/1TJBgbidAe

Ok…was something else supposed to happen? Did I miss something?

Apparently not, if Twitter is any indication. Many, including people on the left, were incredibly nonplussed by the tape, some even fussing that they’d missed their bedtime to watch it:

The video was of Michael Cohen, the president's longtime personal attorney, boarding his plane in September 2016. Not an unusual or strange thing. Omarosa said it was to show he wasn't a coffee boy etc. I don't think even Trump would try to say that.

Well that video sums up nothing