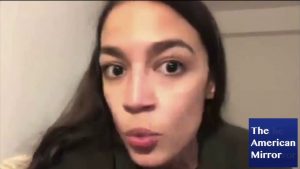 Alexandria Ocasio-Cortez is the darling of the mainstream media and lauded by fellow progressives as the fresh, millennial face of the new Democratic party.

The adoration she receives is fitting, considering she couldn’t possibly do a better job embodying all the bad stereotypes about dumb, uninformed millennial progressives who know little more about how government and the economy work than what fits on a bumper sticker.

She’s said in the past the right is “threatened” by her, as evidenced by all the attention she gets from conservatives and Republicans.

But it’s tough not to pay attention to an ideological opponent when they make blunder after blunder and gaffe after gaffe and remain ignorant of how utterly idiotic they sound every time they open their mouths.

This is Ocasio-Cortez in a nutshell, and, after last month’s campaign speech in which she declared she would be “inaugurated” into Congress (Representatives are sworn in) and start “signing bills” (Congress writes and votes on bills, the President signs them), it wasn’t too surprising to learn this week that she doesn’t actually know what the three branches of government are.

But it was still hilarious, especially considering she doesn’t seem to know that she doesn’t know what the three branches of government are.

The newly elected Representative from New York will be sworn in in January, so she might want to take a little time after figuring out how to afford an apartment in DC to brush up on her basic high school civics after this latest facepalm-worthy statement:

We can’t start working in 2020. We need to have a bill right there ready to go, drafted and something that can be passed within a hundred days of a new presidential administration, because we are in a race against time.

First of all, AOC, there are no “chambers” in the government. There are branches. She got the “three” part right…but that was about it.

Now, if you’re reading this and you’re unclear on what the three branches are, don’t be embarrassed, as you most likely did not get elected to the House of Representatives. And if you were running, I have the full confidence that you, like any sensible and intelligent adult, would have the good sense to research exactly what the House was and where it landed in the whole structure of our Federalism.

The three branches of government in our federal republic are the Legislative, Executive, and Judicial.

Alexandria Ocasio-Cortez did not have the good sense to brush up on high school civics and doesn’t even know the terms for the branches she does know. And it occurs to me now it’s likely only a matter of time before we uncover that she doesn’t actually realize we even have federalism in the US.

It’s not surprising that a progressive would completely forget about the little old’ Judicial branch since they’re not that into on law and order.

It’s also not surprising that the kind of people who think getting free stuff is as simple as saying “give us free stuff!” and voting for a woman who says “let’s give people free stuff” wouldn’t understand how the government, the economy, or the fundamental laws of physics work.

But it is disturbing nonetheless that someone who is this ignorant and immature could make it as far as the House, and get so much attention and praise for doing so.