WATCH: Now Elijah Cummings Wants Trump To Come To Baltimore, But Not Really 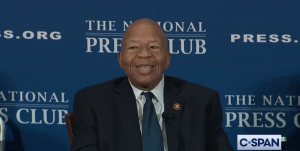 Days after President Trump’s comments on the city’s shoddy condition rightfully put Baltimore under the nation’s microscope, Rep. Elijah Cummings is finally extending an invitation to the president to visit the city.

Well, sort of, but not really.

“I want President Trump to come to my district,” Cummings said at a National Press Club event this week. “Oh God, I want him to come so bad.”

Is that what the kids these days call “whataboutism?” Correct me if I’m wrong, but I thought we weren’t allowed to draw attention to one thing as opposed to another. Oh, wait, only conservatives and Trump supporters? Gotcha.

Don’t forget that the Trump admin extended an invitation to Cummings to tour a Housing and Urban Development (HUD) facility in Baltimore with HUD Sec. Ben Carson, which Cummings declined “due to scheduling conflicts.”

Oddly enough, Cummings revealed on Wednesday that he hasn’t actually invited President Trump on this little stroll through Baltimore, claiming he “can’t get to him.” Of course, he welcomed the media to write editorials about his offer anyway.

It seems if Cummings really wanted a presidential visit to his district, he’d make a legitimate effort to see it happen. His actions, however, seem to indicate he’d rather make a bunch of empty statements to the media to give Trump more Twitter fodder.

Because political posturing is totally going to fix Baltimore. Riiiight.