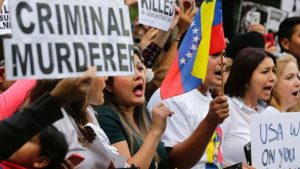 Gosh, I love this woman.

Nikki Haley, Trump’s designer-clad foreign relations pit bull who has on more than one occasion laid epic smackdowns of naughty world leaders on the floor of the UN where she represents our great nation, crashed a rally organized outside the UN building in New York to protest Venezuela’s inhumane Maduro regime.

Haley, who has pushed to hold Venezuela accountable for their gross human rights violations within the United Nations, showed up at the rally and grabbed a megaphone to give a very clear message to the Venezuelan people–and their crooked leader, Nicolas Maduro.

The protesters, who Fox News says seemed to be caught by surprise by the sudden visit from Ambassador Haley, cheered emphatically at her message of support and hope.

“We need your voices to be loud, and I will tell you going to tell you the United States voice is going to be very loud,” Haley declared.

he told the cheering protesters about her recent trip to the Colombia-Venezuela border and said that while Maduro is flying around in private jets and eating at nice restaurants ordinary Venezuelans were lucky to get one meal a day as they tried to escape from the country to Colombia.

Speaking through a megaphone, Haley told the protesters: “I can tell you that I talked with President Trump and he is fired up about this. He is angry at Maduro. His comments were we are not just going to let the Maduro regime backed by Cuba hurt the Venezuelan people any more.”

Now that’s how you do foreign relations.

While the wannabe socialists on the left love to gloss over the millions of Venezuelans who are crying out to be saved from their corrupt and power-hungry leader, who is following the playbook of every other repressive Marxist regime in the history of ever, the Venezuelans in attendance at this rally were deeply moved by Haley’s expression of support.

One of the protesters, Roma Flores, told Fox News that she is in contact with friends in Venezuela and what she hears from them makes her cry. She said Haley’s appearance was very helpful to the people back in Venezuela.

“It was very important because it gives us the strength to keep going,” she said.

“Ambassador Haley’s steady support to desperate, helpless crying pleads of the Venezuelan people, gives us strong hope for the restoration of democracy, peace and freedom in a country hijacked by a criminal organization with drub trafficking and terrorist ties,” Medina said. “Soon with the help from our friends, we shall break the chains of Maduro’s tyranny.”

Haley has been working with Venezuelan opposition activists this month, and also attempted in 2017 to form a meeting of the Security Council to discuss Venezuela, but was blocked by Russia and its allies. She instead was forced to hold an unofficial meeting on the humanitarian crisis in the South American nation.

Maduro, on the other hand, blames the US for the ills of his regime, almost as if he and his predecessor hadn’t seized the vast majority of private property in their nation’s country and crippled their economic system all on their own.

Speaking to the UN on Wednesday, he also complained about negative media coverage, a claim which will certainly get him no sympathy from a Presidential administration that has had a wildly successful first term with nothing but a steady stream of negative press.

Good thing Trump doesn’t let the negative media coverage stop him from improving the lives of not just Americans, but people anywhere living under the oppressive yoke of Marxism.