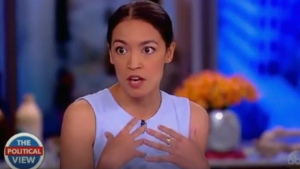 In the span of a week, 28-year-old Alexandria Ocasio-Cortez has become the new face of democratic socialism in America.

Last week, Ocasio-Cortez toppled Democratic Caucus Chair Joseph Crowley in the primary race for the 14th Congressional District of New York, a stunning and surprising win that many thought represents the future of the Democratic party.

And if the passionate beliefs of young millennials are any indication, sadly, this is true.

The young, pretty, latina version of Bernie Sanders, Ocasio-Cortez has taken the news cycle by storm with her starry-eyed vision of an America in which getting things for free is a human right.

And that’s apparently about the extent of her starry-eyed vision of America. Oh, and you get no more guns and definitely no more tax cuts.

Also, like Bernie Sanders…she’s basically a total fraud and can barely articulate what Democratic socialism even is, which doesn’t exactly make her unique among those who adhere to the vague tenets of the ideology.

Appearing on The View on Friday (because of course she appeared on The View), co-host Meghan McCain asked the young Congressional hopeful if she believed the future of the Democratic party was socialist.

In a clip shared by the Washington Free Beacon, Ocasio-Cortez replied with what appeared to be stock campaign rhetoric that sounds like it was torn right from a stoner’s circle in an Oberlin College dorm room.

“First of all, there’s a huge difference between socialism and Democratic socialism,” she clarified before proceeding to not explain the difference at all.

“Democratic socialism, and really what that boils down to me, is the basic belief that I believe that in a moral and wealthy America and a moral and modern America, no person should be too poor to live in this country.”

Oh, sorry, were you waiting for more? That was it.

The future of the Democratic party, ladies and gentlemen, can apparently be summed up on a virtue-signaling bumper-sticker slogan that literally means absolutely nothing.