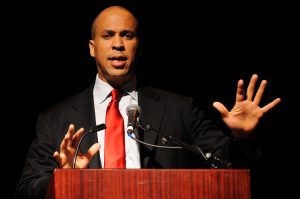 When a local elected official gets presidential aspirations, his or her home turf almost invariably suffers neglect. It’s just science™.

In the case of presidential candidate Sen. Cory Booker (D-NJ), it seems he left the city of Newark, New Jersey (where he has previously served as mayor and city councilman) in disrepair before ever taking aim at the Big Show.

In a video documenting a clean-up effort by Newark residents who said they were inspired by a similar project in “rat and rodent-infested” Baltimore, conservative YouTuber Austen “Fleccas” Fletcher got quite an earful from the people of Newark about Booker.

“They call this the end of the world down here,” one resident tells Fleccas, referring to an abandoned apartment complex that has become a base of operations for drug users and criminals.

When asked why he thinks Newark is on the decline, one man helping with the clean-up tells Fleccas that, “honestly, a lot of it has to do with the representation.” Another man chimes in, saying, “When they get into office, they don’t do much. They talk a good talk, but they forget all about what they said they were going to do.”

“We are the people who vote the mayors in, and we be telling them we need help to get the crime rate down,” says another woman. When asked if she’s a Booker supporter, the woman gets a little feisty and says, “No, no! That’s a definite no! Cory Booker’s not for the people. Cory Booker is nothing — I wouldn’t even vote for him to become president or anything else.”

“To be honest with you,” continues the man helping with the clean-up, “if you go into any suburban neighborhood in this country, and you had even a fourth of what you see here, there would be an uproar and people would be fired from their positions immediately, and they’d make sure the city got fixed.”

Another woman notes that the current mayor wants to make Newark a “sanctuary city” and declares that they simply “can’t afford that.”

“They are not putting their citizens first,” she states, adding that elected officials like Booker need to “stop focusing on hating Trump and look at the people who put you into office.”

“The people of Newark have spoken, @CoryBooker,” Fleccas said in a tweet, hoping to draw Booker’s attention to the state of Newark. “They want you to: Prioritize the American citizens in your district instead of those in the city illegally. Stop focusing all of your energy on hating Trump! Your district needs help!”

The people of Newark have spoken, @CoryBooker.

They want you to:
-Prioritize the American citizens in your district instead of those in the city illegally.
-Stop focusing all of your energy on hating Trump!

Watch the full video below: