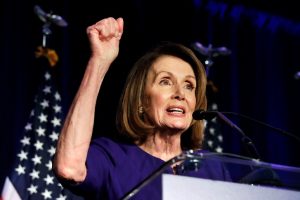 OK, so as a conservative I’m not thrilled that the Democrats won the House…but I am lightweight delighted that we’re going to hear a lot more from Nancy Pelosi.

This lady is a hoot.

Sure, she’s a borderline fascist who thinks that MS-13 members are lovely and women have a God-given right to murder their own children, or something, but whenever she opens her mouth, hilarity ensues.

She also just so happens to be such a hardcore, psycho progressive that she’s likely to accomplish much more than drive moderates into Trump’s arm (and give us lots of amazing sound bites) if she is once again appointed Speaker of the House.

And the magic has already begun.

During a slightly incoherent press conference where Pelosi celebrated the Democrat’s victory in the House of Representatives following Tuesday’s midterms, she laid out their plan to fight the super duper evil Republicans who want all sick people to die a miserable death.

She also asked the crowd to cheer for preexisting conditions.

I’m not kidding–check it out:

“It’s about stopping the GOP and (stuttering) Mitch McConnell’s assault on Medicare, Medicaid, the Affordable Care Act, and the health care of 130 million Americans living with pre-existing medical conditions,” she cried.

Then–wait for it–“Let’s hear it more for pre-existing medical conditions!” she declared, pumping her frail, little arm in the air.

I know you’re a crazy progressive who hates liberty and everything good and pure, Nancy, but boy, do I love you sometimes.