WATCH: Nan Says Border Wall is “Immoral,” But We Need to “Secure Our Borders” 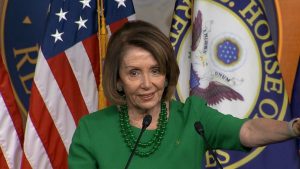 Can you believe she may soon once again be the Speaker of the House? This isn’t a particularly thrilling notion for lovers of things like freedom, common sense, and sanity, but hey, she’s bound to give us plenty of mock-worthy sound bites, right?

She’s already at it, saying seemingly self-defeating things while trying to find a way to undermine the wall that Americans made very clear in 2016 they were fully in favor of the government building to keep our Southern border secure.

Now more than ever it appears that wall may be a very good idea, as violent mobs of military-aged males, er, sorry, women and children, attempt to bum-rush border checkpoints and climb the small barrier walls that already exist on our shared border with Mexico.

Both Mexico and Congressional Democrats insist there’s no such need for a wall, reality says otherwise.

Now, Pelosi appears to be trying to be proverbially straddling the border wall herself, trying to affirm that we do indeed need to secure our border, we just don’t need a wall to do it, because, morality (or something.)

Most of us, speaking for myself, consider the wall immoral, ineffective, expensive, and the president said he promised it. He also promised Mexico would pay for it. So, even if they did, it’s immoral still…

We have a responsibility, all of us, to secure our borders – north, south, and coming in by plane…and that’s a responsibility we honor, but we do so by honoring our values as well.

So, if we want to honor our values, we can’t build a wall. We’ll just secure the border with, what, fairy dust?