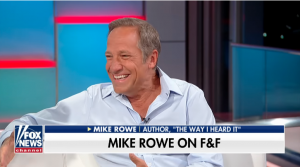 I suspect this nation would be an incredible place if we were so blessed as to have Mike Rowe for President, but I think America has had one too many Drag Queen Story Hours and Pride Months to be deserving of such a gift.

The “Dirty Jobs” host did, however, appear on “Fox & Friends” Wednesday to discuss the wet bag of cats that is the current roster of presidential hopefuls, the state of the American economy, and his new book, “The Way I Heard It.”

Among the first topics pitched to Rowe was Bernie Sanders’ proposed 97 percent tax rate on the 400 richest Americans.

Ever the gentleman, rather than doing what I’d do and giving such an insane tax plan the first visceral, profanity-laden response that comes to mind, Rowe opined, “It’s a free country — ideas, float them, fly them, run it up the old flag pole and see who salutes. In the end, you’ve got millionaires arguing with millionaires over who hates the millionaires the most.”

Nailed it. Somebody buy this man a drink!

Rather than dismiss Sanders’ idiotic tax plan without explanation, Rowe instead retold an illustrative anecdote about former President Ronald Reagan.

“One of the stories they tell [at the Reagan ranch] is the time when Ronald Reagan just finally decided he was done doing movies,” Rowe said. “He was just done because he was paying 92 percent of every dollar he made on films. It was just math.”

“He wasn’t done acting,” he continued. “He just looked at it and did some basic calculus and said, ‘Not for me anymore. Makes no sense to do this.’”

Earhardt then asked if he thought the wealthiest people would simply stop working as a result of that sort of math, to which Rowe responded with a report on his home state of California.

“I live in California. I just read a report that said the exodus this year, as a result of a 13.5 percent state tax and some other tweaks to the system is unlike anything they’ve ever seen,” Rowe said. “I know it’s convenient—it’s fun to hate the rich and all. But in the end, they’re just people and they’re going to do the math and they’re going to go where the math is better.”

Kilmeade stepped in, suggesting that the concept of free money being offered by certain Dem candidates like Andrew Yang is “damaging” to one’s self-esteem.

“You can’t ignore the human condition. We’re fundamentally lazy people. We have to be taught, I think, to not be lazy,” Rowe answered. “I’m just saying that if you give me a choice—and I don’t see myself as lazy—but if you give me a choice of the easy way or the hard way, I can’t help it. I’m going to default to the easy way. Free money? I want it.”

“My biggest concern with that kind of arguing is… once you say okay, free money, the next question has to be, ‘Why not more?’”

“That’s the beef with the $5,000 surge in the middle class right now,” Rowe said, referring to a number that was also reported Wednesday by Fox Business Network from a study which found that American household income had increased during the Trump years by a whopping $5,000. “How do you argue against that? You simply say it’s not big enough.”

One thing the wealthy, the middle class, and the poor have in common is that we all work for reward. Eliminate or sharply reduce that reward, why should we work? Or, conversely, give that reward or a portion of it without requiring work for it, why should we work? The fundamental concept of being paid for one’s work is the driving force behind any healthy economy, and the Democrats are playing Jenga with it.