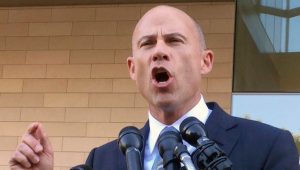 Now that Michael Avenatti has found a way to insert himself back into the media’s current obsession, the Kavanaugh hearings, he’s not going to miss the chance to try to launch himself right into the middle of American politics.

In a move that is called for by absolutely no one, Avenatti, who is best known for defending Stormy Daniels earlier this year and spending the entire month of May in the CNN green room, has decided that he really should consider running for President.

“I’ve been traveling around the country raising money for Democrats,” Avenatti told Kasie Hunt, “and I’ve received an incredible response, every state that I’ve gone to. I think I’ve surprised a lot of people.

“I’ve received a lot of encouragement in various states to run,” he said.

“I’ve received a lot of encouragement from the Democratic National Committee, and senior leadership within the Committee, frankly, to run and people want a fighter,” he continued.

He declined to name the “senior” leaders pushing him to run.

Maybe DNC Vice Chair Keith Ellison, who is being accused of domestic assault by a former girlfriend?

Of course, if he did run, it would be hilarious and wonderful, so I don’t know about you, but I’m all for #Avenatti2020.