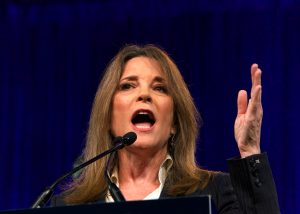 All this gal is trying to do is bring a little peace and harmony to the world, maybe win the presidency, but mostly just bring that Lebowski vibe to the scene and help everyone be cool to each other, and what does she get?

A good ribbing for being kind of a whack-a-doodle, that’s what.

For all her quirks and flaws, however, it seems Williamson has picked up on the likelihood that most of the criticism and jokes at her expense out of the conservative camp are good-natured, whereas the cannibalistic left wants to devour her. We see her as a unique individual made by God who happens to be kind of a goof, not just an overgrown clump of cells or a piece of cosmic broccoli who happened to develop into kind of a goof.

That difference in worldview and respect for humanity seems to follow partisan lines, and Williamson is just now realizing it.

Before appearing on Eric Bolling’s America This Week, Williamson had a bit of a hot mic moment in which she expressed her surprise and exasperation with her fellow “lefties” who, apparently, are being downright jerks to her.

“I didn’t think the left was as mean as the right,” she added, “they are.”

.@marwilliamson: “What does it say that the conservatives are nicer to me? I’m a serious lefty but they are so — I understand why people on the right called them godless — I mean, it’s like, I didn’t think the left was as mean as the right, they are.” pic.twitter.com/0iXkWPRdAW

In the segment, Bolling played the hot mic clip from a previous appearance before bringing Williamson back on the show and inviting her to clarify her comments about the left.

Initially, Williamson appeared none too thrilled that Bolling had just “blasted out” the clip, at which point Bolling cleared up some confusion about the network’s intent to air the clip.

After awkwardly sorting that out, Williamson explained:

“When it comes to… the rough and tumble of politics and how people behave, I think that there are things that happen just in people, it’s not a left-right issue, and I have found it’s tough out there. And I was just talking about the fact that that day you were certainly very kind to me. And listen, many people on the left are kind to me. I’m running for president. It’s not a walk in the park. I was making a comment that I found my life that day some of the “rough and tumble”

you know, the Republicans don’t have to be attacking me right now, i’m in a Democratic primary, so Republicans are, ‘Hi, Marianne,’ whereas some people on the left, because they’re working for other candidates — I understand how it goes, that’s all I meant.”

Does that sound like the desperation of somebody who doesn’t want to have the “Cancel Culture” beast unleashed on her or what?

Now, to be fair, some of us on the right are kinda mean. Ease up on that, maybe. Let the lefties outdo you in meanness while you outdo them in well-argued points, understanding of history, and intelligence in general. That sermon’s on the house, y’all.

Still, I think Marianne Williamson can feel pretty safe walking the streets of any red state knowing that she won’t be milkshaked for being a thoughtcriminal, and I think that fact illustrates pretty clearly just who is the party of civility right now.