WATCH: Kids Who Returned Wallet With $700 In It Is the Best Thing You’ll See All Day 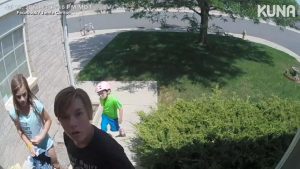 Video doorbells are great. You can capture video evidence of attempted break-ins, communicate with deliverymen when you’re not at home, or, in the case of one Colorado family, you can make the kids who returned a wallet stuffed with cash go viral to thank them.

In an era where most kids are glued to their smartphones, looking at Lord-knows-what, bullying their peers and trying to snort condoms for social media shares, it’s nice to know there are still kids out there not only being instilled with good values, but acting on them.

While riding their bicycles, a group of Colorado children discovered a wallet with $700 by the road. But instead of keeping the cash, the kids were caught on camera returning it to its rightful owner.

“We found your wallet outside of your car, and we just thought we would give it back to you so … I’m going to put it over here so no one takes any money,” one of the children said when a doorbell camera prompted them to leave a message.

The kids, from Aurora, placed the wallet near the house, out of shot of the camera, and scurried off with their bikes.

The wallet belonged to Nigel Drake, and when his dad saw the doorbell footage, he posted it to social media in an attempt to find and thank the kids. It has since gone viral – raking in more than 2,000 shares and 125,000 views.

It’s adorable how surprised and confused the kids look when the video doorbell comes on, and hilarious how one of them says “your welcome!” before the other “thank you!” as they run off to go on with their bike riding.

Good on these parents for getting their kids out in the fresh air as well as teaching them to respect private property and to help people out when they can.

Oh, and Fox News did find out who two of the children were, and their reasoning for their act is pretty awesome:

Two of the children have been identified as Haylie Wenke, 13, and her six-year-old little brother Reagan.

Haylie Wenke said she knows that “if you see something that someone left or dropped, just to always give it back and do the right thing.”

Reagan Wenke said he already has money in his piggy bank.

Sounds like both the Wenke kids are going to grow up to be very decent adults, and we’re happy to see we can have some faith in future generations.