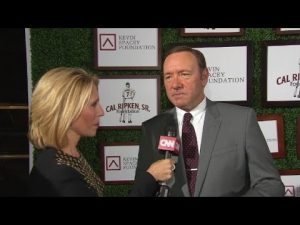 Alleged pervert Kevin Spacey told CNN’s Dana Bash that his role as President of the United States on the House of Cards TV show would have killed Donald Trump before the election. He then went on to ridicule the President calling him a “reality President.”

Spacey was accused this week of attempting to molest a 14 year old actor at a Hollywood party several years ago. He responded with the following statement

“I honestly do not remember the encounter, it would have been over 30 years ago.

“But if I did behave then as he describes, I owe him the sincerest apology for what would have been deeply inappropriate drunken behavior, and I am sorry for the feelings he describes having carried with him all these years.”

That, by the way, is not a denial of the accusation. Apparently Spacey is yet another celeb that has been hiding in plain site.

I have a sneaking suspicion that he would gladly trade pasts with Donald Trump right about now. This expose is just getting started!