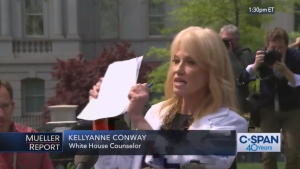 The Democrats have had the House for four months now, and they’ve accomplished…

They’ve managed to set their party back about half a century or more, by coddling socialists and antisemites while promoting Soviet-style destruction of the American economy and more erosion of our constitutional rights.

They’ve let a 29-year-old bartender take the lead of the party while the woman who is supposed to be the 79-year-old official leader of the party in Congress, resorts to passive-aggressively downplaying the influence of the young radicals on television interviews (OK, so I admit her crack comparing AOC to a glass of water was snigger-worthy).

Meanwhile, over in the Committees, Adam Schiff, Jerry Nadler, and Maxine Waters are too busy digging around for Trump’s tax returns to actually influence legislation.

So between half-heartedly putting out Ilhan Omar’s fires, trying to support AOC’s tyrannical aspirations without actually letting her head get any bigger than it is, and scrounging around for something with which to cobble toether impeachment hearings, the Democrats really haven’t had much time to do anything else.

You know, like, oh I don’t know I’m just spitballing here: perhaps find a solution to the border crisis, fix healthcare (heck, they haven’t even managed to make it worse!), or do something to save the planet like they’re always talking about.

Kellyanne Conway, however, the president’s top adviser and the first woman to ever run a successful presidential campaign, has been keeping track of their accomplishments and shared them with reporters this week:

"This is the success of Democrats in the first 100 days of Congress."@KellyannePolls holds up a blank sheet of paper 🔥 pic.twitter.com/clSmM3Ifv8