WATCH: Joy Behar Should Go Live in a Real Dictatorship 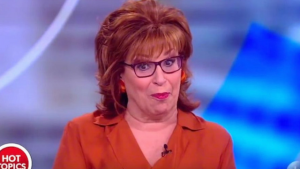 It never ceases to amaze me how completely disconnected the left is from…literally anything and everything real.

It is one thing when someone who’s 21 and a product of the public school system doesn’t understand the difference between a President they dislike and a literal dictator; it’s tragic, but it’s one thing.

Joy Behar, on the other hand, isn’t young. She’s not a millennial. She’s not a Gen Xer. In fact, she’s too old to even be a Baby Boomer.

Behar is now 75, which means she’s not only old enough to remember the USSR vividly, but she was already well into middle age when it finally fell.

She would have grown up in a world that had narrowly avoided the threat of Hitler, arguably the most famous dictator the world has ever known.

And yet, in Behar’s world, a Republican in the Supreme Court would qualify as a “dictatorship.”

Don’t believe me? Take it away, Joy:

Maybe Behar would like to spend a few days in North Korea, where someone in her position would be expected to regurgitate state propaganda and would literally be put to death for saying anything that even resembled the slightest bit of criticism of Dear Leader?

Or perhaps she’d enjoy a little vacation to Iran, where she could be beaten and arrested for daring to venture out in public with her gravity-defying hairstyle uncovered?

I hear the weather is nice this time of year in Cambodia, where the government shuts down newspapers at will and has full control of the military, courts, and police force.

Maybe Joy could get a kickstart on her summer slim down in Venezuela, where the government has taken over all business and the people literally hunt dogs and fight over garbage piles in the streets to survive.

But no, Behar thinks she’s going to be living in a dictatorship because the citizens of a free nation willingly elected enough Republicans to the House and Senate and a Republican President who just so happened to get two SCOTUS picks in his first term. This is, of course, a President who her party regularly laments is shrinking the government, and who enjoys an unprecedented amount of criticism and biased coverage from the media the likes of which we’ve never even seen.

Behar herself sits on that stupid set every day with an audience that regularly claps and cheers as she insults the Vice President’s deeply-held religious faith and whines about Trump’s latest policies.

She’s oppressed all right–oppressed by the toxic rhetoric of the left that’s convincing the freest and most privileged people on earth that they’re living in a dictatorship.