WATCH: Joy Behar Called Out for Blackface Costume in 1970s 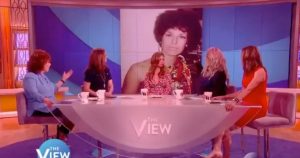 Let me first just say, this humble author was not yet born in the 1980s, so I am just learning that blackface was apparently all the rage for Halloween parties in the simpler days before political correctness.

Seriously though, did everyone dress up in blackface in the 70s and 80s? I mean, what are the odds that both the Governor and Attorney General were busting out the shoe polish in the same decade?

Now, rabid leftist Joy Behar, best known for her daily anti-Trump squawking on ABC’s “The View,” has been busted out for darkening her face for a Halloween costume when she was a young woman.

Not only that, but she apparently talked about it a mere three years ago on the show, when, as far as I know, dressing in blackface was still a cardinal sin to enlightened, tolerant, race-sensitive leftists.

The show even ran an image of the old photo pic.twitter.com/qKQqzDPxyn

So why hasn’t she been excommunicated? I mean, there was a real live black person on the set with her?

I suppose it’s the same answer to the age-old question as to why some people are eviscerated for ideological crimes and others are left untouched.

Because she’s a leftist.

It might not be enough to preserve the careers of politicians in Virginia who are being thrown under the bus by their own party, but I guess for the likes of Behar, she’s done enough progressive pandering to atone for her sins.