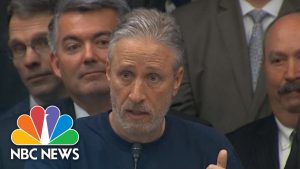 You don’t have to be a liberal to appreciate Jon Stewart’s comedy. He was a great Daily Show host in a time when neither party was off-limits and comedy still existed on late night.

He has been sadly followed up with Trevor Noah, who is neither anywhere near as funny nor intellectually consistent as Stewart, but at least Stewart has now dedicated himself to much worthier causes, like advocating for 9/11 responders.

I don’t care who you are, Democrat or Republican, if you’re fighting for healthcare for 9/11 first responders than you definitely have your priorities right, especially when it comes to government funding.

Despite being a well-established left-wing Democrat, Stewart deserves credit in the age of Trump for being willing to credit Trump’s DOJ with making sure that these heroes are represented in Washington.

“Listen up everybody, the Trump Justice Dept is doing an excellent job administrating the 911 compensation act,” he said while speaking at a press event with the First Responders, who were in Washington to bring attention to the 9/11 Compensation Fund, which is running low.

You may be unfamiliar with the concept of intellectual honesty in a time when Trump Derangement Syndrome is epidemic, but it’s actually possible to give a politician credit even if you disagree with most of their policies and voted for the other guy (or an elderly lady.)

He also took the opportunity to rip on inflated government spending with his signature humor that made the old school Daily Show great.

“I understand what a town of fiscal responsibility this is. As I stood in the marble rotunda laced with gold, I thought ‘We have to be very careful not to waste money on first responders with cancer.’ This is nonsense,” he quipped.