WATCH: Jimmy Kimmel Gets Called Out for ‘White Privilege’ in Gun Control Campaign 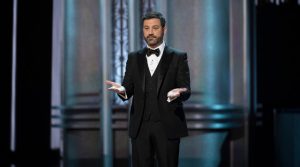 Jones’ comment is a response to Kimmel using his show as a platform last Friday night to push gun control after the horrific shooting at Santa Fe High School in Texas.

“So they sit there with their hands in their pockets, pockets that are full of gun money, and they do nothing,” Kimmel said Friday of Republican lawmakers. “They just wait for the outrage to pass because it didn’t happen to their children… The least you can do is register to vote, right now. Make sure we vote for politicians who will do something.”

Kimmel went on to say that “these kind of things don’t happen in countries with real, sensible gun laws.”

In a moment highlighted by The Daily Caller, Jones responded to Kimmel’s comments by describing him as a man with the resources to surround himself by armed security who doesn’t want less privileged Americans to take adequate steps to protect themselves.

“I’ve never seen a better example of white privilege than Jimmy Kimmel,” Jones said. “He’s a rich white man that has security, but he doesn’t want other Americans to have security as well, have the Second Amendment.”

“Look, we’ve seen this happen, where in communities where people who look like me and Antwone,” he said, referring to another African American panelist. “They have passed gun legislation, but it didn’t work. So I’m going to tell you this: We’ve tried it your way. We’ve tried it the liberal way, where they have gun control, and it did not help our communities. And so I’m not willing to disarm myself.”

.@LawrenceBJones3: "I've never seen a better example of white privilege than @jimmykimmel. He's a rich white man that has security but he doesn't want other Americans to have security as well, have the Second Amendment." pic.twitter.com/5kBPWtg4Ip

The problem with the vast majority of these nutty leftist celebrities is that they often times don’t really care for the causes they claim to be supporting. They just use these issues as a means to appear hip, cool, “in the know” so they can appear relevant and keep the work flowing in.

It’s all about PR relations and looking “woke,” not about saving children. If protecting kids was their ultimate aim and goal, why are they in support of abortion? That’s inconsistent.