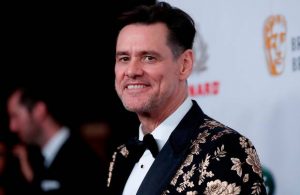 Jim Carrey is a talented comedian who will no doubt go down in the annals of film history for the characters he has portrayed.

Jim Carrey also happens to be a crazy person, not just for his leftist politics, but for his bizarre political art pieces and apparent complete and total ignorance of actual current events.

This was on full display as he accepted the Charlie Chaplin Award for Humor at the Britannia Awards (which is apparently a thing) this weekend.

He used the opportunity to slam his favorite scapegoat, Donald Trump, which is consistent with basically every other public comment Carrey has made since Trump was elected.

Trump seems to occupy quite a bit of Carrey’s headspace, despite Carrey living a particularly luxurious and comfortable life.

Of Trump he said: “He took on the American right wing of his day, its worst evils, hatred of immigrants, contempt for the truth, greed, and the abuse of power. We are fighting those same evils today.”

Clearly having not received the memo that the child separation policy at US border detainment policy ended months ago, he ranted on:

“Shamelessness is not, nor will ever be, a superpower. It is the mark of a villain. Kidnapping children is not what great nations do. Almost half of America at this moment believes there is a sinister deep state diabolically plotting to… what? Give them healthcare?”

Just to confirm, he was receiving an award for comedy and not for drama, which, considering this acceptance speech, might have been more appropriate.

He went on to dedicate his award–his comedy award–to Christopher Steele, the agent behind the infamous Steele dossier (that, ironically, seems to have done nothing more than implicate Democrats), to Kavanaugh accuser Christine Blasey Ford, and to fellow-actor and fellow-crazy person, Robert De Niro, who was recently the intended recipient of one of the crude explosives devices sent to several prominent Democrats.

“We in America are misinformed,” Carrey said. “Reality shows have warped our idea of what a hero is, or what the truth is. So tonight I’d like to dedicate this award to those who remind us of our virtues, who remind us of the truth.”