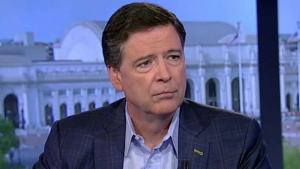 The man has spent the last 16 months trying to justify his incredibly lenient treatment of Hillary Clinton’s blatant crimes, his actions during the 2016 election, his unethical leaking of FBI documents to the press, his sudden firing by President Trump as unjust, and now, he’s written a book about all of the above so that he can continue to try to make himself look innocent.

Comey’s recently released book, “A Higher Loyalty”, has received quite a bit of media attention, and he’s been basking in the glow of mostly friendly interviews.

But when he sat down with Fox News’ Bret Baier last night, things got messy again, as they often do when he is pressed to tell the truth.

Comey has consistently made conflicting statements on the most controversial issues of his time as FBI director, on top of constantly trying to explain away obvious partisan decisions he’s made and an undying commitment to covering his own rear.

As Bair pressed him about the Steele dossier, leaking his memos to the press, taking it way too easy on Clinton, and his past statements on all of the above, Comey scrambled, once again, to turn himself into the good guy.

In one incredibly attempt at distraction, Comey claimed that the Steele dossier had first been ordered by Republicans, which is entirely untrue.

He also played dumb about the Strzok-Paige texts; declassified texts from two FBI agents having an extra-marital affair that display astounding bias from within the administration.

With @BretBaier, Comey on Strzok-Page: 'When I saw the texts, I was deeply disappointed in them, but I never saw any bias.'

The lovers bashed Trump and talked about “insurance plans” in case he was elected, and Comey saw no bias? How was this man ever appointed to such a high position?!

Check out the whole trainwreck of an interview here: