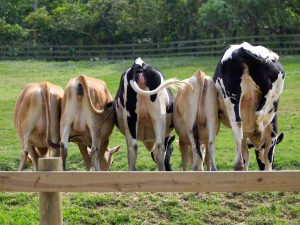 An unnamed rancher in Harlan, Iowa, had an opportunity many of us would go nuts for: the chance to tell Sen. Elizabeth Warren to her face that the Green New Deal and other climate propaganda-fueled policies she advocates are, in fact, anti-science.

What a lucky, lucky dude.

In a video shared on Twitter this week, the rancher confronted Warren during a campaign visit on Thursday over her support for socialist Rep. Alexandria Ocasio-Cortez’s (D-NY) “Green New Deal,” which, among other ridiculous things, essentially calls for a ban on climate-destroying cow farts.

According to the New York Post, an initial outline of the GND “set a goal to get to net-zero, rather than zero emissions, in 10 years because we aren’t sure that we’ll be able to fully get rid of farting cows and airplanes that fast.”

The verbiage was later changed to “emissions from cows,” which makes it a lot more sciencey.

Anyway, back to Iowa.

Speaking to Warren, the farmer expressed his concern about proposals of changing the feed that cattle are given, warning that it could actually lead to more carbon dioxide production.

“I would say we shouldn’t get rid of, you know the ‘Green New Deal’ says we need to get rid of cows, I don’t agree with that,” he said.

“Ehh.” As if she’s in any position to disagree with a rancher over the technical details of the animals he raises for a living. Does this lady get a bad diagnosis from her mechanic or her doctor and say, “ehh” if it doesn’t align with her preferred reality?

The farmer then became understandably frustrated with Warren, turning up the volume a little bit to tell her, “My point is we have become so ignorant of the basic principles of biology in food production that we have said we answer them all through technology instead of letting ‘mother earth’ and having respect.”