WATCH: In Last-Ditch Effort to Stop Kavanaugh, Protesters Claw At the Doors of the Supreme Court As He’s Sworn In 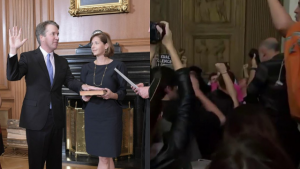 On Saturday evening, it appeared all was lost.

The FBI investigation was over, having found nothing to implicate Kavanaugh in the crime that Dr. Christine Ford was super-duper, pinky-swear certain happened to her at some time, she thinks, in the early 1980’s.

Republicans had the votes they needed to confirm him, and somehow, despite the fact that there were screeching, hysterical women in the gallery demanding they not for Kavanaugh, they just went ahead and voted him in anyway, if you can believe that.

Kavanaugh was set to be sworn in Saturday evening in the Supreme Court building.

There was only one thing standing in his way.

Determined to find some last-minute loophole to stop the Kavanaugh confirmation that could be accessed by loud screaming and vandalism, brave protesters flocked to the Supreme Court building, their mission clear.

Sadly, there was only one thing standing in between the protesters and Kavanaugh.

Those big, oppressive, patriarchial doors to the Supreme Court.

At first, the police barricades that were put in place to keep the protesters back were no match for their fury.

They heroically ascended the steps to the Supreme Court like the soldiers at Normandy (if the soldiers had been 30-year-old single white women with PMS).

That was when their plan was foiled.

Dedicated to their mission of disrupting the legal, constitutional process of swearing in a Supreme Court justice who has been confirmed by Congress, they didn’t let the fact that the doors were clearly locked, not to mention incredibly heavy, stop them.

They clawed desperately at the doors, certainly not unlike what their unfed, abandon cats were likely doing back at their apartments, wondering why their mistress wasn’t curled up with a bottle of win and a Sex and the City marathon right about now.

Sadly for these valiant protesters, they simply couldn’t claw down the doors in time to stop Kavanaugh’s swearing in, and they will now be expected to report back to the Supreme Court building on Monday at 9 am sharp for their red robes and white hoods.