WATCH: ICE Official Actually Has to Explain to Dem. Senator That Illegal Aliens Break the Law 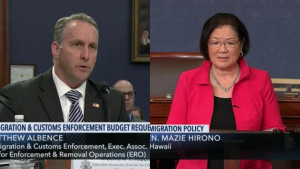 If you ever wonder how anyone can be so foolish as to think that an open border is the solution to…anything, this is why.

I think it’s easy for us conservatives, who tend to be governed by common sense, to remember that the majority of Democrats who oppose Trump’s border policies do so because they genuinely believe that he’s blocking immigrants from entering this country, as opposed to simply illegal immigrants.

Ask most bleeding-heart liberals who call for ICE to be abolished and compare the now-ended border policy separating children from their parents/the people they crossed the border with, and they’ll say it’s because it’s wrong to prevent immigrants from entering the country.

Legal vs. illegal rarely has anything to do with it. After all, it has become politically incorrect to say “illegal” so there are probably plenty of people who don’t make the connection that “undocumented” means they’ve broken the law.

One of those people might be the Senator from Hawaii, Maize Hirono, who actually had to have it explained to her on Capitol Hill today that illegal immigrants have, well, broken the law.

During a hearing Tuesday, Hirono asked Executive Associate Director for Enforcement and Removal Operations (ERO) Matthew T. Albence if he “would you send your children to FRCs?”

“Again, I think we’re missing the point,” Albence responded. “These individuals are there because they have broken a law. There has to be a process.”

“They have broken a law but only as deemed so by the president with his –” Hirono actually said. As if Federal Law didn’t exist before Trump’s zero-tolerance policy. What does she think he’s zero-tolerating?

“No ma’am,” Albence replied. “They are there for violation of Title 8 of the U.S. Nationality Act. Okay. U.S.C. 1325. That’s illegal entry is both a criminal and civil violation. They are in those FRCs pending the outcome of that civil immigration process. They have broken the law. ”

Now, you would think at this point anyone with even half a brain would realize they had no idea what they were talking about. But Hirono still seemed to miss the simple concept that illegal immigrants break the law, saying she was “confused.”

To be honest, I think there’s a good chance that Hirono actually knows that illegal immigrants break the law, and is most likely trying to maintain the facade that it’s not actually illegal to just waltz across our Southern border or stay in the US past the time your visa has expired.

There are enough people out there fully convinced this is true, and we know from literally every single item on the rest of the Dem’s platform that they’re fond of bending the truth or downright lying to begin with, not to mention, rely heavily on math incompetence to make sense of their economic policy.

Is Hirono really this dumb, or is she playing to the crowd?