WATCH: “ICE Killer” Antifa Member is Not So Tough in Person! 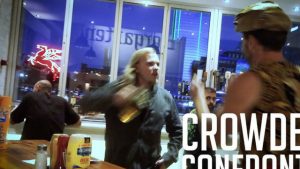 There is no doubt to any sensible person that the violent rhetoric on the left has gotten completely insane.

Now, I’m not saying there aren’t violent people on the right, far from it. But whenever the left catches wind of these people, they normally dominate the news for weeks on end while Antifa, who regularly shows up at right-wing rallies armed with homemade weapons and openly stated goals of smashing in heads, they’re compared to D-day heroes.

As a popular and controversial millennial conservative, Steven Crowder knows all too well how often threats of violence against conservatives, or government officials for that matter, go ignored by the mainstream media.

So he’s been taking matters into his own hands–tracking down people making threats against him and others and trying to talk to them.

Or, at least, holding them accountable for their actions.

In one recent “Crowder Confronts”, he tracked down an Antifa member who had said he’d hoped for “a piece of Crowder” for a long time.

This Antifa member also just so happened to have openly called for the murder of ICE agents online multiple times, including offering to pay money for anyone who killed one of the “pigs.”

So, dressed like a genie (yes, actually), Crowder showed up to meet with the guy under false pretenses, armed with a microphone and a camera.

As it turns out, it doesn’t look like this guy has much follow-through…

I think this incident is incredibly telling of the young people today who are out there using violent, angry rhetoric, yet slink away when confronted in real life.

In a way, I think they’re so wrapped up in the romanticism of “revolution” they’re not entirely aware that what they’re doing and saying online is…real.

Maybe I’m giving them a little too much credit, but the way this man sulked angrily away from Crowder instead of even yelling in his face shows he has little real-world commitment to the violence he wishes upon others.

Unfortunately, his actions online do have real-world consequences, as he will soon find out.

Crowder filed a police report as soon as the conversation ended.

I think it’s smart and productive to hold these idiots accountable for their actions. The stuff they’re up to, after all, is highly illegal and dangerous, and a lot of them are probably just young, idealistic fools who will outgrow these silly notions in a few years.

It’s definitely worthwhile to give them the wake up call they need that they’re in the grownup world now and ought to behave as such.