WATCH: Here’s a Wall That Reduced 55,000 Illegal Migrants to Zero in Two Years 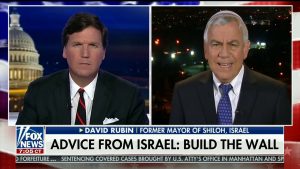 Everyone’s arguing about the wall again, now that we’re in the throes of an apocalyptic partial government shutdown.

As everyone contemplates what life without functioning National Parks will look like, the Democrats continue to refuse to build a wall because it won’t work/will work to keep immigrants out but is immoral.

Meanwhile, nations who have built walls and successfully put a stop to problematic floods of illegal immigrants are likely shaking their heads at our tomfoolery.

One such nation is Israel who has a big, beautiful wall on their shared border with Israel and successfully brought the flow of roughly 55,000 illegal migrants to a big, fat zero.

In the interview, David Rubin, mayor of Shiloh, Israel, explained what his nation did to zero-out — that is, to completely and utterly eliminate — illegal immigration across that nation’s southern border.

It’s a lesson many conservatives are hoping will get through to Democrats who say a wall is immoral or dangerous and just won’t work.

Rubin explained that from 2010 to 2012 some 55,000 illegal immigrants came from Africa through Egypt into Israel.

In a tiny nation like Israel, he said, “that’s a lot.”

The result was that crime rocketed in working class neighborhoods where they settled.

Grassroots interests around the country pressured the government and Israeli officials finally agreed to build the wall.

“The fact is, now nobody’s complaining,” he added. “Everyone’s happy we don’t have illegal immigrants in Israel.”

Which just serves to underscore how ludicrous it is that anyone in the US actually opposes a border wall.