WATCH: Guest Walks Off Panel on Air When Host Compares Christianity to Sharia 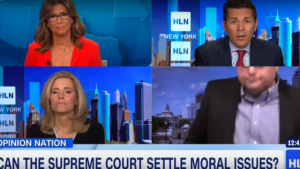 Or, in this case, carefully undoing your mic and earpiece and walking right of the set in the middle of a segment.

Sometimes, you just have to know when to walk away, especially when someone is making claims that are so ridiculous there simply aren’t enough hours in the day (or minutes left in the segment) to refute.

This had to have been what conservative radio host Steve Deace was thinking when he just up and walked away after enduring the preposterous claims of CNN contributor Dean Obeidallah when the two appeared on an HLN panel together Friday.

The segment was centered around President Donald Trump’s upcoming nomination of a new Supreme Court justice and the panelists discussed the potential long-term ramifications of the pick.

“The stakes are really high in this country,” Obeidallah said. “And there are people who want to impose Christian Sharia law in this country. And what I mean by that is that they want the Bible as the law of the land.”

Deace later fired back that any comparison between Islamic Sharia law and Christianity was “preposterous,” but Obeidallah, who is very progressive, continued to push the comparison.

“Christian Sharia law in this context is simply shorthand for turning religious beliefs into the laws of the land,” Obeidallah continued. “I’m not going through the Bible. To me, that’s what Sharia is in the Muslim world, what Sharia is here. I’m not sure why you’d be upset unless you’re advocating it. I’m not suggesting you are.”

Deace immediately got up and left the set.

Who can blame him?

First of all, aren’t progressives like Obeidallah the first ones to advocate for how beautiful and peaceful Islam is? So why is Sharia law so bad then?

Well, Sharia is bad, and when a government applies Sharia law, Christians and Jews can be taxed, the Bible banned, women treated as actual second-class citizens (see Saudi Arabia, they legit have to have male guardians sign off to do basically anything), homosexuals imprisoned or even killed, and don’t even think about free speech, particularly blaspheming Islam in any way.

The really inconvenient factor of the asinine argument that Obeidallah and other worldly-minded progressives have probably never even thought about is that the laws of our country are actually based on a biblical worldview, including the principles of self-determination and liberty which Obeidallah clearly enjoys.

At the end of the day, you simply can’t compare Christianity to Sharia.

So I guess it was a better option to just leave the conversation entirely.