WATCH: Green Beret Gets Waterboarded in His Backyard in Defense of CIA Nominee Gina Haspel 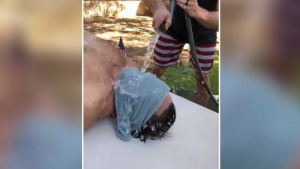 Democrats have been all in a tizzy about Trump’s CIA head nominee Gina Haspel because once, she was mean to the terrorists who planned 9/11.

Can you believe that? All these guys wanted to do was practice their faith by flying planes into buildings and killing thousands of people, and she had the nerve to participate in their waterboarding.

Well, Green Beret and MMA fighter, Tim Kennedy, is coming to Haspel’s defense, in a very dramatic way…by being waterboarded himself.

Why someone would subject themselves to torture to support a Trump admin nominee is beyond me…we can only hope he’s survived the ordeal.

The waterboarding starts at about 13 minutes in, but be sure to hear what Kennedy says first.

“I just want everybody to understand what waterboarding is. Waterboarding is an opportunity for us to get information, useful information, out of somebody we’re questioning. There is no permanent damage, and it’s just the fear of water that scares people,” Kennedy states, before going under the hose himself.

“Does this look like torture to you guys?” he asks later, when we’ve had a chance to see what waterboarding really looks like, with himself as the subject, although he does point out that it’s incredibly uncomfortable.

The idea of waterboarding may make your stomach churn and seem like torture, and this is understandable. But if you think that there’s anything nice and pleasant about interrogating 9/11 terrorists or ISIS soldiers, think again.

Haspel, who began her hearing before Congress last week, has come under fire for destroying tapes of “enhanced interrogation” techniques, including waterboarding, which she was directed to do as the chief of staff for then-head of CIA’s National Clandestine Service (NCS), Jose Rodriguez.

The Daily Wire reports that she was, at the time, cleared of any wrongdoing because, as then-Deputy Director of the CIA Mike Morell said, “Ms. Haspel claims that she believed — incorrectly as it turned out — that Mr. Rodriguez was going to obtain approval from then (CIA) Director (Porter) Goss before releasing the cable.”

When the incident had come under scrutiny, Rodriguez claimed he’d ordered the tapes destroyed to protect the identity of CIA agents.

The subjects of these interrogations were Abu Zubaydah and Abd al-Rahim al-Nashiri, both terrorists; Zabaydah being the mastermind behind 9/11.

There are plenty of Americans who probably don’t care what you do to men like this, let alone if they’re waterboarded for the sake of getting information that could prevent thousands of more lives from being lost.