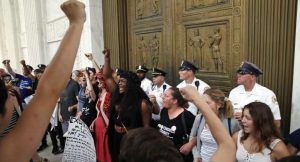 Unless you’ve been living under a (safe, cozy, comfortable) rock, you’ve probably noticed that the left seems to have gotten a little…what’s the word…crazy lately.

It’s not exactly like Antifa is synonymous with the average Nancy Pelosi voter, but you’d think the DNC would denounce the riotous violence of unhinged millennials who never got spanked when they threw temper tantrums as adults so now they think that’s an acceptable adult reaction to not getting your way.

They haven’t. Everyone from Nancy Pelosi to Hillary Clinton to Maxine Waters (not exactly bastions of sanity, I know, but leaders in the Democratic party) have endorsed incivility and even violence against Republicans, and their tantrum-throwing voters are clearly more than happy to comply.

The RNC has just released an ad warning of this clear threat to the safety and security of all Americans, which highlights the troubling rise in calculated violent acts committed against those on the right.

The ad comes just after CA Rep. Pelosi “said earlier this week that if collateral damage happens against those who disagree with the political agenda of the Democratic Party then ‘so be it,'” the Daily Wire notes.

“We have to have total clarity about what we do when it comes to everything — a woman’s right to choose, gay marriage … whether it’s about immigration, whether it’s about gun safety, whether it’s about climate …” Pelosi said this week. “I think that we owe the American people to be there for them, for their financial security, respecting the dignity and worth of every person in our country, and if there’s some collateral damage for some others who do not share our view, well, so be it, but it shouldn’t be our original purpose.”

Yeah. They’re not crazy or violent at all, are they?