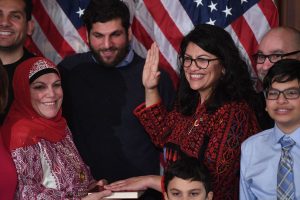 I’m sorry, isn’t one the left’s main criticisms of Trump that he lacks decorum? Is unpresidential? A loose cannon?

Yet they see no problem with newbie congresswoman talking about impeaching Trump with the vocabulary of a gangsta rapper? (Is gangsta rap still a thing? I don’t know, I’m old.)

Michigan Democratic Congresswoman Rashida Tlaib, who was sworn in on a Koran on Thursday’s first day of the 116th Congress, because of course she was, celebrated later that day by urging a crowd at a progressive gathering to take heart that defeating the Trump agenda was possible.

In so many words, at least:

People love you and you win. And when your son looks at you and says, ‘Momma, look you won. Bullies don’t win.’ And I said, ‘Baby, they don’t, because we’re gonna go in there and we’re gonna impeach the mother***er.’”

So, she apparently not only made this profanity-laced motivational speech in public just after being sworn in as a Congresswoman but to her son.

“We’re going to go in and impeach the motherfucker” pic.twitter.com/oQJYqR78IA

This was not even the first time she made waves in Washington, and she had been there like two days.

For her first move in the House, she also removed Israel from the map in her office.

Someone has already made a slight alteration to the map that hangs in Rashida Tlaib’s new congressional office. pic.twitter.com/mwyshIog4r

She also penned an op-ed for the Detroit Free Press that more, um, articulately called for Trump’s impeachment:

President Donald Trump is a direct and serious threat to our country. On an almost daily basis, he attacks our Constitution, our democracy, the rule of law and the people who are in this country. His conduct has created a constitutional crisis that we must confront now …

We already have overwhelming evidence that the president has committed impeachable offenses, including, just to name a few: obstructing justice; violating the emoluments clause; abusing the pardon power; directing or seeking to direct law enforcement to prosecute political adversaries for improper purposes; advocating illegal violence and undermining equal protection of the laws; ordering the cruel and unconstitutional imprisonment of children and their families at the southern border; and conspiring to illegally influence the 2016 election through a series of hush money payments …

We are also now hearing the dangerous claim that initiating impeachment proceedings against this president is politically unwise and that, instead, the focus should now shift to holding the president accountable via the 2020 election. Such a claim places partisan gamesmanship over our country and our most vulnerable at this perilous moment in our nation’s history. Members of Congress have a sworn duty to preserve our Constitution. Leaving a lawless president in office for political points would be abandoning that duty …

This is not just about Donald Trump. This is about all of us. What should we be as a nation? Who should we be as a people? In the face of this constitutional crisis, we must rise. We must rise to defend our Constitution, to defend our democracy, and to defend that bedrock principle that no one is above the law, not even the President of the United States. Each passing day brings more pain for the people most directly hurt by this president, and these are days we simply cannot get back. The time for impeachment proceedings is now.

She may want to stick to this kind of language the next time she’s in public.