WATCH: “Feminist” Serena Williams Sure Likes to Yell at Female Judges, Too 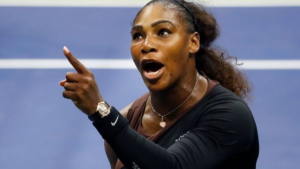 Over the weekend, there was some sort of significant tennis match featuring one of the only two tennis stars I am remotely aware of, Serena Williams (sans Venus).

I have no idea how on earth the rules in tennis work, but apparently, you can lose a match for yelling at a judge after your coach has been caught sending you signals from the sideline.

Williams, who had seemed lined up for a comeback as she has apparently not been playing tennis as of late, was penalized for both these, as well as throwing her racket on the ground (tennis sure seems strict!), and subsequently lost the match.

She, naturally, blamed the only thing any sensible person would clearly be able to see was the cause of her loss: sexism.

I may not understand how professional tennis works, but I certainly don’t understand how a judge can be sexist during an all-female tennis match, but apparently, one can.

And you better believe the mainstream media has been on her side, tsk tsking away at all the deep-seated sexism in the professional tennis world.

Even though Serena Williams and her sister are most likely the only tennis players any man could name…because who watches tennis?

Williams, so quick to cry “sexism”, seems to be herself a true egalitarian when it comes to being a hothead.

And while she claims Judge Carlos Ramos only penalized her because he’s a sexist in the first place, it seems like there are a lot of “sexist” judges out there she also had no problem chewing out.

YouTuber Austin Fletcher put together a supercut of several times this has happened, or she’s yelled at fellow female players:

[VIDEO]: If Serena Williams is "fighting for women's rights and for women's equality" why does she have a history of harassing and intimidating women line judges/players? She told one woman she was "unattractive inside" and threatened to hit another.