WATCH: Engineer Comes Up With Epic Way to Get Back at Package Thiefs 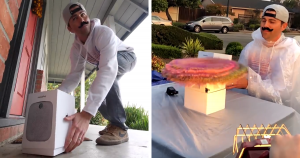 In the midst of the most polarizing period of recent American history, this holiday season has reminded us that liberal or conservative, black or white, man or woman (or…?), we all get pretty ticked off when people steal our crap.

And given the prominence of online shopping, a lot of opportunistic thieves have been helping themselves to recently delivered packages left on stranger’s packages.

While most people would just get a dog (seriously, people, get a dog), YouTuber and one-time NASA engineer Mark Rober found a much more complicated—and much more hilarious way to thwart would-be package thieves.

With a glitter bomb.

A really, really high-tech glitter bomb that also just so happened to capture the thieves being glitter bombed on video for our enjoyment.

Rober, who worked on the first Mars rover but has since built a pretty successful YouTube channel and Halloween costume line applying his vast engineering knowledge to many useful and fun things for everyday people.

This recent video, however, caused him to go massively viral, receiving 25 million views in one day.

Looks like I’m not the only one greatly enjoying the schadenfreude of watching thieves get glitter bombed.

Sadly, we aren’t all brilliant engineers, but hopefully, the video’s popularity will deter a few thieves to get their own dang Christmas presents.