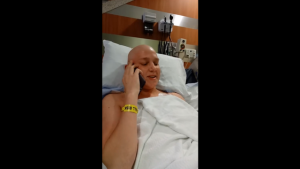 Usually, when terminally ill children are connected with the Make-a-Wish Foundation, they are given the opportunity to meet their favorite sports star or superhero.

One dying teen in Texas, however, made an incredibly poignant and humble request: to personally ask Texas Governor Greg Abbot to end human abortion.

Abbot, a pro-life Republican, agreed to continue to pursue a full ban of abortion in Texas.

The Governor of Texas has promised a pro-life teen dying from cancer that he will “outlaw abortion altogether in the state of Texas.”

Governor Greg Abbott, 60, called his constituent Jeremiah Thomas as the teen lay in the cancer ward of a children’s hospital.

Jeremiah asked the Governor to treat abortion “like an act of murder.”

“For my wish, I wanted to talk to you and discuss a bill of abolition [to end abortion]” he said.

Jeremiah told the governor that a recent poll showed that 68% of [Republican] Texans want abortion abolished.

“Sir, you would be representing the demands of Texans if you would pass this bill,” he said.

“We could end abortion here and now.”

The boy’s face lit up at the governor’s response, which was recorded on video and uploaded to Facebook.

“Your wish is on the Republican party platform position,” Governor Abbott said, “and we’re going to be pursuing this…And that is to outlaw abortion altogether in the state of Texas”

Jeremiah has both a tragic and an inspiring story. Diagnosed with osteoblastic osteosarcoma, a bone cancer that is resistant to radiation therapy in March of 2018, he and his family have been sharing his treatment with the world not only to ask for prayers for the boy, who has been given a 10% chance of recovery, but to show what God has been doing through him and the love He has poured out on him.

“What was truly amazing to see was the ministry opportunity that was given to me when I got sick,” Jeremiah says. “As soon as I got sick, my testimony blew up [in size]. Constantly people were texting me, encouraging me, giving me their testimony and their blessings and prayers.”

It is so amazing and humbling to see such a young man in such a scary place who wants nothing more than to use his platform to glorify God and save the unborn.

Please remember to keep Jeremiah, and the work he is doing, in prayer!