WATCH: Diamond and Silk OWN Georgia Rep. in Epic Defense of Free Speech 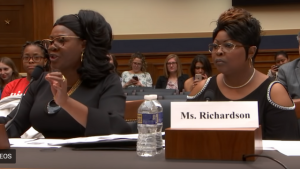 Sure, no one can stop talking about the Kanye Trump breakage of the internet. But while liberal heads were exploding, Diamond and Silk, the firey, outspoken sisters who made a name for themselves brilliantly and hilariously expressing their support for then-candidate Trump during the 2016 election just quietly won the internet for the day.

The duo, sisters Lynnette Hardaway and Rochelle Richardson, faced the House Judiciary Committee today to testify regarding the blatantly biased treatment they and other conservatives have received on Facebook.

Diamond and Silk have experienced relentless censorship and even full removal of their page for a time, deemed “unsafe” and propagators of “hate speech” by Herr Zuckerberg and his Facebook Thought Police Force.

When Rep. Hank Johnson (D-GA) attempted to imply the women had been making a killing on Facebook, they wasted no time laying down exactly what kind of treatment they and thousands of conservative commentators have been subject to over the last 15 months.

“You ladies are very impressive to me,” Rep. Johnson said, after expressing he felt this time might have been better spent focusing on the Russians or gun control, “you have taken something and moved forward with it, exercising your First Amendment rights, and you’ve made a ton of money off Facebook, is that correct?

“The point I’m trying to make is you all have been bashing Facebook and you’ve been making a ton of money, isn’t that correct?” Johnson continued, interrupting the ladies constantly and barely letting them speak.

Diamond and Silk interjected with their signature sass and conviction, managing to get their say in despite Johnson’s rudeness.

“We didn’t bash Facebook,” Hardaway replied. “We brought the light on how Facebook has been censoring conservative voices like ours… They won’t let us monetize on Facebook. They stopped it for six months, 29 days. They limited our page.”

“And Youtube did also by demonetizing 95 percent of our videos for no reason at all,” Richardson added, “deeming it as hate speech.”

Johnson again pushed, determined to somehow invalidate their argument by profiting even a small bit from their social media fame, adding “you still sell merchandise.”

“Even if we sell merchandise that don’t have anything to do with Facebook,” Hardaway replied. “Facebook censored our free speech, and shame on the ones that don’t even see that we have been censored.”

“When the Black Lives Matter people come in, everyone is up in arms,” she shot. “Let me just say this here, if the shoe was on the other foot and Mark Zuckerberg was a conservative, and we were liberals, oh all fences and all chains would have broke loose. You know it and I know it. What I find appalling is that these Democrats they don’t want to take up for our voice because we support the president.”

“That’s right, and I hope everybody goes on Facebook and follows us,” Hardaway threw in, which just about had me cheering!

These ladies are so amazing, I promise you this video will be the best 5 minutes you’ve had today.