WATCH: Diamond and Silk on Roseanne Uproar: “This Is Not One-Sided” 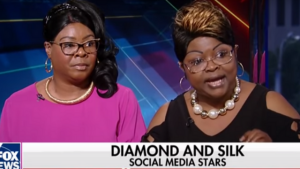 You can always count on YouTube duo Diamond and Silk to infuse some common sense–and staunch Trump support–into any situation, and the recent uproar over Roseanne’s highly controversial tweets is no different.

Speaking with Maria Bartiromo on Fox News, the sisters expressed their shared sentiment with the President that the left is employing a tired double-standard to conservatives and Trump supporters.

“What about racism on the other side?” asked Diamond, pointing to the many examples of offensive jokes made by left-wing media personalities, particularly on ABC, the network that canceled ‘Roseanne’ after Barr’s tweet about Valarie Jarrett.

They said if ABC wants to cancel Barr’s show, “we can cancel The View, we can cancel Jimmy Kimmel…some of those people have said the most derogatory things.”

The sisters, African-American Trump supporters, explained that they thought Roseanne’s comments were a mistake but admired her for apologizing.

“She was woman enough to apologize for it when the joke fell flat,” Silk said. Both sisters, however, later pointed out that Jimmy Kimmel, who often makes the Trump administration the butt of his jokes, justifies his low-blow comments by explaining he’s just a comedienne.

But Roseanne is a comedian too, Diamond said: “She said she was making a joke, and I want to give her the benefit of the doubt.”

They maintained that, despite the nature of the joke, they do not believe that Roseanne is racist. “One tweet, one bad joke doesn’t make you a racist.”

They also explained that they’re no stranger to racially-charged comments.

They also added that a comedian recently called them “bootlickers and c**ns” on Twitter but he removed the post when they addressed him directly.

“What about the racism on the other side?” Diamond asked. “If we’re going to have a conversation, let’s tell the truth about the conversation rather than be one-sided.”

She also added that a good place to start, however, would be to “stop calling each other names.”