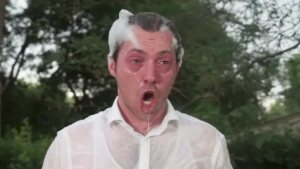 WARNING: This is not a parody.

A Colorado Democrat running for the House just filmed, edited, and produced an advertisement in which he pepper-sprayed himself in the face in an effort to show that pepper spray is just as effective as a firearm.

Because we all remember that time the US armed forces took back Falluja from violent insurgents using pepper spray, right? Or that time Steven Williford took down the Sutherland Springs shooter with the pepper spray on his keychain, right? No? It wasn’t pepper spray?

No, that’s right. It was a firearm.

It’s always a firearm. Cops, security guards, soldiers, Marines, off-duty prison guards all carry firearms because that’s how you take down a bad guy. Pepper spray is what you use when you don’t want to kill someone, or when you live in a state that denies you your Second Amendment rights to bear arms and you have to fend dangerous city streets by yourself.

Anyway, so this dude,  actually thought it would be effective to spray himself in the face with pepper spray to demonstrate that we needn’t arm teachers with big scary guns, pepper spray will be just fine!

“I’m calling on Congress to stop talking past each other and try something new,” he says in the video. “Empower schools and teachers with non-lethal self-defense tools, like this can of pepper spray.”

He then goes on to dunk his face in a bucket of soapy water and discuss how incredibly uncomfortable the pepper spray is as he stands and walks and talks.

If he were a shooter, he’d still be perfectly capable of firing his weapon.

Your ridiculous campaign ad does nothing than convince me that much more how much we need armed security in schools. Sure, it doesn’t need to be the teacher, I’ll give you that.

But it sure as heck doesn’t need to be pepper spray, as you so brilliantly demonstrated.