WATCH: Dashcam – Cop Tells Felon ‘You Reach For That Gun, I’ll Blow Your Brains Out’ 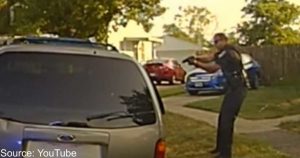 Kettering, Ohio – Kettering Police officer Jonathon McCoy gave about 30 commands to the occupants of a car he pulled over before firing nine shots and killing a felon who had a gun sticking out of his pants. (Video below) the

The Kettering Police released video of the Aug. 27 incident, according to The Dayton Daily News. The newspaper reported one of the commands Officer McCoy gave Jason Hoops before shooting him was, “You reach for that gun, I will blow your brains out, do you f—— understand me?”

Chief Protsman said Hoops was a felon and was prohibited from carrying a firearm. And police also have a signed statement from someone who said Hoops said he was not going back prison and “was willing to take out any cop that he had to.”

The incident began as a traffic stop and Officer McCoy noticed the gun sticking out of the pants of Hoops.

“We know there was a physical confrontation where the officer reached in and grabbed hold of Mr. Hoops’ right arm, trying to stop him from reaching down towards the gun,” Protsman said, according to the Dayton Daily News. “This continues for a little bit.”

“We now know through the investigation that Mr. Hoops pulled his hand away from him and then reached down for the gun, and the officer stepped back, and that’s when the shots were fired,” Chief Protsman said.

The female driver and other male in the van could be heard telling Hoops, “Jason, please don’t do it” and “it’s just not worth it,” Chief Protsman said.

Protsman said that when officers were searching for the gun and opened the van’s door, “The gun was laying on the floorboard in between the door and the seat,” the chief said. “So, at some point, that gun did come out of his pocket during this encounter.”

“What I’ve seen in this video, I’m pretty confident in saying that this officer did a very good job on this stop,” Protsman said.

You can see the video of the shooting below: