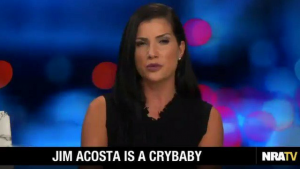 Shortly following yet another humiliating razzing from a Trump rally crowd in Florida this week, Jim Acosta appears to have taken his frustration out on Sarah Huckabee Sanders, grilling her during a briefing Thursday on the President’s comments that “fake news is the enemy of the people.”

While it seems that anyone would agree that yes, fake news is the enemy of the people, Acosta knows full well that Trump means CNN when he says “fake news” so and seems to have taken on this identity for himself and was as a result offended by the President’s statement.

Acosta is no stranger to finding his name in the headlines, and in fact, seems rather committed to ending up in the headlines at all costs, even when he looks like a fool.

And while he needs no help looking like a fool, Dana Loesch wasn’t going to let his self-serving victim mentality for being heckled at a Trump rally or criticized by the President slide after the way his network treated her and Marco Rubio following the Parkland shooting.

“Acosta is upset that someone yelled ‘CNN sucks,'” she said on her NRA TV show Relentless. “Imagine how he’d feel if his network set up a public lynching of him. As they did of me and [Sen.] Marco Rubio, wherein people called me a ‘murderer’ and they screamed ‘Burn her!’ And they rushed the stage and grabbed at me when I left. Jake Tapper corroborated this shortly after it happened, tweeting this in response to those who were in doubt: He says, ‘I don’t know but Chris’s’ — talking of my husband — ‘description is accurate and I made sure she was escorted out of the room.'”

i don't know but Chris's description is accurate and I made sure she was escorted out of the room.

“I wonder if Acosta can imagine what it feels like when his network allows guest after guest, day after day, to refer to you as a ‘murderer,'” she continued. “To refer to six million law-abiding Americans as people who hate children and are terrible parents simply because we believe in the right of self-defense.”

If you’ll remember, the town hall event CNN hosted just days after the horrific Parkland shooting more closely resembled a wrestling match than an open discussion. Students heckled Loesch from the crowd, while she remained calm and collected on stage. She was even respectful and courteous to Emma Gonzalez when Gonzalez told her she would “will support your children in a way that you will not,” a truly disgusting and despicable thing to say to any mother, but especially a mother like Loesch who has dedicated her career to empowering mothers to protect their children.

Loesch always stays classy and she’s regularly subject to harassment far worse than anything Acosta has experienced, and guess what?

She’s a member of the media.

They’re far from it. The crowd at the Trump rally are the people. The NRA is the people. A free media is the people, and guess what, plenty of members of the media do not tow the mainstream fake news narrative line.

"@Acosta is upset that someone yelled CNN sucks. Imagine how he'd feel if his network set up a public lynching of him. As they did of me… many in legacy #MSM stopped prioritizing advancing news and truth in favor of advancing themselves and their political agendas." —@DLoesch pic.twitter.com/dzugatdPmP