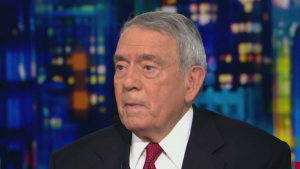 They’re trying so hard to demonize Trump, they just can’t stop inadvertently boosting his numbers and making him look better by comparison.

I mean, let’s be real. Trump is far from your ideal politician. Yes, this is one of the things his supporters like about him, but if it weren’t for the polarizing and hysterical political opposition and unfriendly media he faces every day, his political career may have ended up a joke.

Instead, the unhinged left seems to be turning themselves into a joke as they watch their usual smear tactics fail again and again.

Dan Rather is the latest pundit (I know, he’s supposed to be an anchor…I stand by this characterization though) to inadvertantly bolster Trump support. In an attempt to paint POTUS as a butthead on CNN this week, he ended up giving him what Trump supporters are calling a cool new campaign slogan.

Speaking to CNN host Don Lemon on Tuesday, Rather said:

The “mean as a wolverine” really caught on:

Dan Rather on Trump: "He's mean as a wolverine."

Don’t these guys realize they just make @realDonaldTrump look more badass when they say things like this? I mean do you want to vote for a negotiator that’s “mean as a wolverine” or “meek as a mouse”? pic.twitter.com/dNHg8w7ne5

Dan Rather said President Trump is "Mean as a Wolverine". Yes sir he is. We didn't vote to put another sissy in the White House who doesn't have a spine to stand up for America.

We voted for an America First President that is tough, fights back and plays the media like a fiddle!

Pretty sure the American people wanted someone as tough as a wolverine to be president after having a community organizer run America into the ground for 8 years. https://t.co/ucaiN10AyT

Trump definitely does have a certain likeness to the embattled teenagers in “Red Dawn” who hid in the mountains and fought the communist invaders, calling themselves “Wolverines” after their high school mascot.

If anyone’s continuing the American legacy of fighting the Red Invasion in 2018, it’s definitely Trump! Works for me!