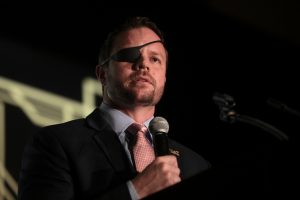 I can’t get enough of Dan Crenshaw. He’s the freshman member of Congress the media is not obsessed with, but he’s everything a Representative should be, and more.

These days, it seems almost too much to expect our elected officials to not be bat-crap crazy, but Crenshaw is certainly going against the grain, and good for him for being actually sensible and reasonable.

So sensible and reasonable is he, that he actually knows how the Constitution works and how taxes ought to be set up in our country. I know, I know, a novelty among freshman Representatives, so this is yet another reason we just love us some Dan Crenshaw.

In a video he recently posted to Twitter, he gave an excellent breakdown of the flawed perception the left has of taxation, and it was pure gold.

“Why does the left hate the tax cuts? [Because] they think the people exist to fund the govt. We believe the govt exists to protect the inalienable rights of the people. When people keep their money, we get more jobs & wage growth, & less wasteful spending by ‘benevolent’ bureaucrats,” he wrote.

“The role of government is to protect God-given rights that we have and to ensure that we live as free as possible,” he continues (amen, brother!)

“The role of government is to tax people to the least extent possible, while still taxing them enough to cover basic needs for government. And if we’re questioning what those needs are we can just look at our Constitution, they’re generally pretty clear there.”

I think that just about sums it up, don’t you think?

This bulldozes so many misperceptions the left has about taxes in one simple, short statement. The left acts like the sole aim of government is to generate a need for and increase the flow of taxes.

The government is not a business, nor is it an omnipotent force to solve all the worlds ills.

Our government was founded with the novel idea that people do best when they are left alone, and that a system of governance by the people and for the people can exist to ensure that people remain left alone.

It’s time we get back to our roots.