WATCH: Are all cultures the same? Are some better than others? 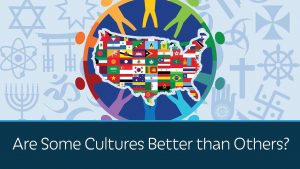 “Multiculturalism,” the idea that all cultures are created equal and no culture is better than another, is a term that is being tossed around quite flippantly by the American left.  It is being held up as an ideal that simply isn’t true — Western culture is clearly the best that history has produced and certainly the culture to emulate.

How dare we assert such a claim? The west is BEST?!? Shock! Horror! OMG!

Author and filmmaker Dinesh D’Souza explains in PragerU’s latest video that novelist Saul Bellow was accused of racism for having the boldness to say, “Find me the Tolstoy of the Zulus, or the Proust of the Papuans, and I would be happy to read him.” President Trump was also accused of racism for saying in July that Western civilization embraces principles like “the rule of law and protect the right to free speech and free expression.”

Neither statement is racist at all!

The Left claims that Western civilization was built on “oppression,” citing colonialism and slavery. However, D’Souza points out that neither concept is “uniquely Western”:

The British conquered India and ruled it for 300 years. But before the British, the Persians, the Mongols, the Muslims, and Alexander the Great had done exactly same thing — conquered large parts of India.

Indeed, the British were the sixth or seventh colonial invader to occupy India.

As for slavery, it has existed in every culture. It was prevalent in ancient China, in ancient India, in Greece and Rome, and in Africa. American Indians practiced slavery long before Columbus set foot here.

D’souza explains that it was actually the West that eradicated slavery and has embraced “democracy, capitalism, and science.”

“I’m an immigrant from India. My wife is an immigrant from Venezuela,” said D’Souza. “Despite our differences of ethnic background, we have both assimilated to the unique values of America — the values embodied in our Constitution and our laws. The pursuit of happiness. The American Dream.”

America, by design, is multi-ethnic and not multi-cultural.  It is indeed that great “melting pot.”  Unfortunately for many that have entered and now reside in America they have very little interest in doing much melting.  In many cases they want their culture to not only be considered equal, but often seen as superior or deserving of more benefit and recognition.  And THAT is not a concept that made America great.

Watch the video below.